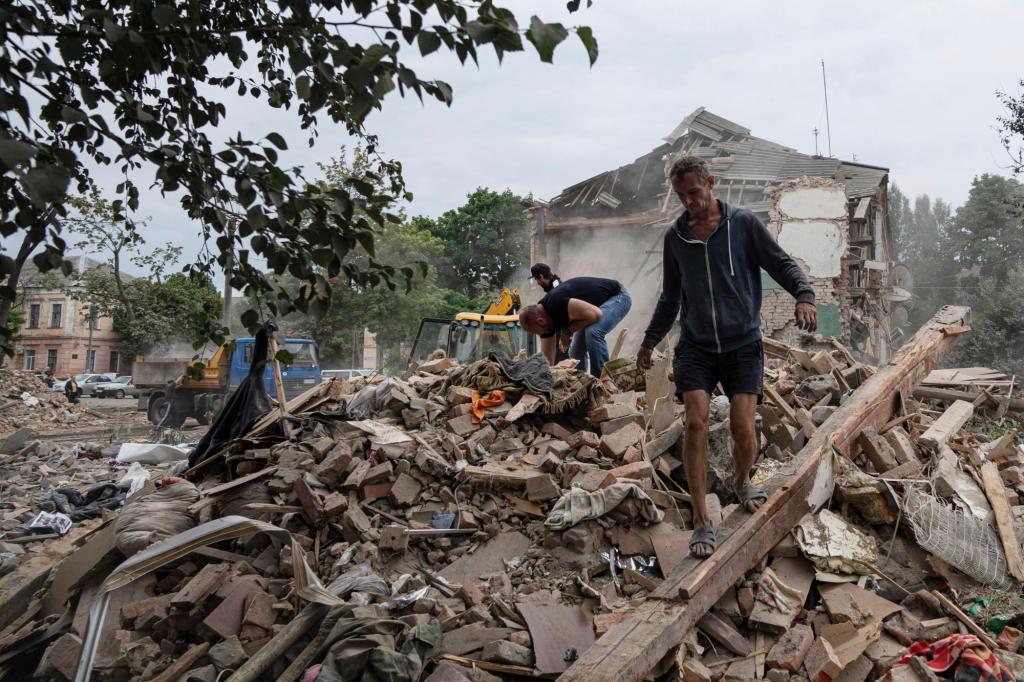 Russia has targeted Ukraine’s main port of Odesa – through which grain shipments would take place – with cruise missile strikes, barely 12 hours after Moscow signed a deal with Ukraine to allow monitored grain exports from Ukraine’s southern ports. “The enemy attacked the Odesa sea trade port with Kalibr cruise missiles,” Ukraine’s operational command south wrote on Telegram, raising doubts about the viability of the deal that was intended to release 20m tonnes of grain to ward off famine in large parts of the developing world.

Ukrainian president Volodymyr Zelenskiy claimed the strikes on Odesa showed Moscow could not keep its promises. “This proves only one thing: no matter what Russia says and promises, it will find ways not to implement it,” he said during a meeting with US lawmakers, according to a statement from the presidency.

The US secretary of state condemned the Russian attack against Odesa, accusing Russia of deepening the global food shortage. In a statement posted on Twitter, Antony Blinken said: “The United States strongly condemns Russia’s attack on the port of Odesa today. It undermines the effort to bring food to the hungry and the credibility of Russia’s commitments to the deal finalized yesterday to allow Ukrainian exports.”

Ukraine’s defence ministry has urged citizens in Enerhodar, a key area seized by Russia, to reveal where Russian troops are living and who among the local population was collaborating with the occupying authorities. “Please let us know as a matter of urgency the exact location of the occupying troops’ bases and their residential addresses … and the places of residence of the commanding staff,” it said on Saturday, adding that exact coordinates were desirable.

The governor of Zaporizhizhia has said that Russia is keeping 170 people captive in the Zaporizhizhia oblast, the Kyiv Independent reports. According to the governor, Oleksandr Starukh, Russian forces have abducted at least 415 people in the southern region since 24 February – the day Russian forces invaded Ukraine – and at least 170 individuals are still being kept captive.

Video footage has emerged of a powerful explosion that took place in the Russian-occupied territory of Horlivka on Saturday in the Donetsk oblast, Euromaidan reports. Reports from outlets have been claiming that Ukrainian armed forces have hit a Russian ammunition depot.

The former deputy secretary of Ukraine’s Security Council has been suspected of high treason, the Kyiv Independent reports. According to a report released on Saturday by the Ukrainian State Bureau of Investigations, Volodymyr Sivkovych is suspected of collaborating with Russian intelligence services and managing a network of agents in Ukraine that spied on behalf of Russia.

Hungary’s nationalist prime minister Viktor Orbán called for US-Russian peace talks to end the war in Ukraine, lashing out at the European Union’s strategy on the conflict. In a speech in Romania on Saturday, the 59-year-old rightwing leader also defended his vision of an “unmixed Hungarian race” as he criticised mixing with “non-Europeans”. Orban has condemned Russia’s invasion of Ukraine in February, but maintains an ambiguous position on the conflict.

Two US citizens recently died in the Donbas region, CNN reported on Saturday, citing a US state department spokesperson. The spokesperson, not named in the report, did not provide any details about the individuals or the circumstances of their deaths but said the US administration was in touch with the families and providing “all possible consular assistance,” according to CNN.

Deborah James cancer podcast You, Me and the Big C wins top award

Monkeypox outbreak could be just ‘the peak of the iceberg’, WHO warns

Rescuers in Morocco dig for third day to...