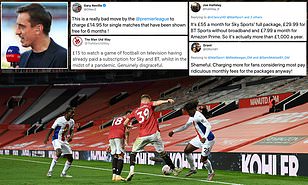 The Premier League drew criticism and disdain from across football and beyond on Friday when it announced plans to screen matches played behind closed doors on pay-per-view TV.

With seven months having passed since fans were last allowed to attend stadiums and with the top flight in dispute with government and the rest of the football pyramid over its responsibility to help stave off financial disaster for the game, the news was the public relations version of conducting a two-footed tackle on yourself.