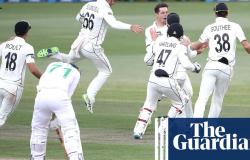 Diana, Princess of Wales, dismissed criticism of her campaign for a worldwide ban on landmines as an “unnecessary distraction” during her famed trip to Angola where she walked through a minefield, newly released documents reveal.

She also spoke of plans for a world tour to other heavily mined countries, including Vietnam, Cambodia and Kuwait, but seven months later she had died in a car crash in Paris.

Labour calls for investigation over funding for Robert...

Haribo struggles to deliver to UK shops due...