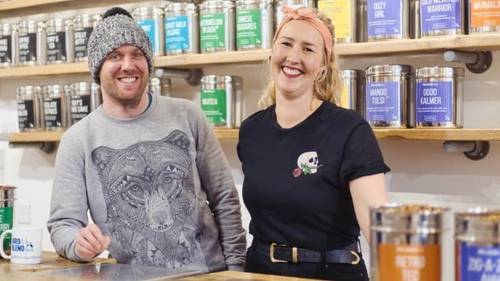 It is not surprising that tea is one of the most consumed drinks in the UK. We go way back with the tasty beverage to have reached this point wherein there are over 1500 different types of teas to sample from. UK based Bird & Blend Tea Co. is a tea mixologist startup that aims to bring this flavourful drink to more people, and cater to the needs of those who require more than just a simple brew. The startup has also raised £1 million in its latest funding round.

Bird & Blend Tea Co. raised its latest funds via a crowdfunding campaign, on Crowdcube. The startup secured £1 million from over 1800 investors , which brings its total funding raised till date over £1.3 million, following its first raise in 2017. In a conversation with UKTN, the company’s Co-Founder & Creative Director Krisi Smith reveals that Bird & Blend was valued at a notable £18 million on Crowdcube, during this funding round.

The fresh funds will be utilised for supporting the company’s local high street expansion, investment in the wider development of its range of flavours, and build its ‘communiTEA’ via a digital innovation strategy. Four new brick and mortar stores are planned as well. “Bird & Blend Tea co. will be opening in Glasgow later in October’21, which will be the first store in Scotland. Our plan is to open four new stores a year and this year we have opened in Oxford, Norwich and Exeter. Watch this space for what is coming in 2022,” says Smith.

The tea mixology startup currently employs over 125 people across its stores, headquarters, and for its ecommerce site. With fresh funding and new stores on the way, their team can be expected to grow further. “With each new store there will be new positions and we are currently growing our Brand team with positions available for a Marketing Manager, Social Media & Community Manager and a Subscription & Retention Manager,” Smith notes.

Bird & Blend says their mission is fairly simple. The startup aims to lead the way in British tea innovation by offering a range of notable blends, with their types of offerings currently stand at over 100. They also offer teas via their 14 UK-wide retail stores, based in Brighton, Bristol, Cardiff, Exeter, Manchester, Norwich, Nottingham, Oxford, Tunbridge Wells, Worthing and London sites: Angel, Borough and Portobello.

Furthermore, the company attends festivals and runs educational Tea Mixology workshops as well. With the fresh fund infusion, it will be undertaking Environmental, Social and Governance projects, with a climate commitment to become a net-zero carbon company. It also aims to achieve B Corp status, which signifies a business that balances purpose and profit.

Being a brick and mortar retail business first, Bird & Blend took a hard hit by the COVID-19 pandemic. “We believe in the importance of local communities, the high street and people-led experiences and so the temporary closures of our stores during the lockdown months represented a challenge for us financially, for our teams & for our customers,” Smith comments.

Soon after, the company shifted its stance towards digital and on-demand services. This is where the company’s digital innovation strategy comes into play. It re-launched its website in March 2021 and is now all set to build further on it. Smith adds, “Over the last 12 months we have seen a 230% increase in sessions to our website, due to our loyal fan base stocking up online during lockdown, but also new customers looking for online replacements for their usual routines.”

The startups’ digital strategy includes a ‘Digital ADVENTure’ that is coming up in December, to support its advent calendar. There’s also a new addition of an interactive digital tasting notes diary with more new things expected in the future. “We are bucking trends and thriving on the high street with 6 new stores opening since lockdown last year, a new website and new warehouse in Worthing,” Smith concludes.

From losing £500 to going public in London through a direct listing: One Wise decision

Judge to give verdict on Julian Assange’s extradition after Christmas