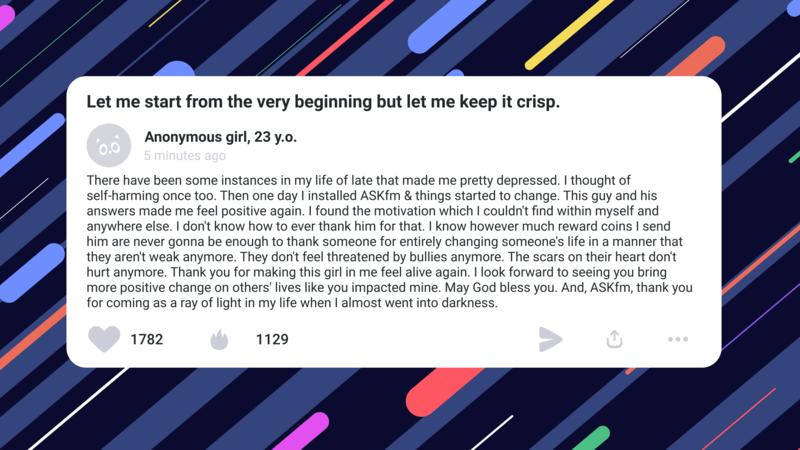 Social media (un)safety: how ASKfm helps teenagers on the edge

Social media has become an irreplaceable part of our lives for more than a decade. In the meantime, they have gotten a huge number of fans and just as many opponents. While for some people they became a platform for self-expression or even a new workplace, others call it the biggest problem of the new generation. Cyberbullying, cybercrime, catfishing — we have already coined new terms to  describe the perils of social media.

So can social networks really benefit their young users or even make their lives safer? That question became the biggest challenge for the developers of social media.

The team at ASKfm, a social network for anonymous questions and answers, have already found an answer to that question. Here’s how they protect their users, and what the users themselves say about it.

The biggest goal of ASKfm as a social network is to create a community where everyone can be themselves, no matter their financial or family status. A platform where there is no place for cruelty, judgment, or discrimination. By creating communities for like-minded people, ASKfm motivates its users to be positive and support each other. This way, a dangerous accident can be prevented from the moment a person considers it.

ASKfm moderators do the most important job. Their task is to check all the content and users’ communication for any mentions of harming themselves or anyone else. With its strict moderation and high safety standards, ASKfm is creating a space for teenagers where they can not only feel more relaxed thanks to anonymity, but where they will also be protected from potentially dangerous content.

Despite the fact that ASKfm gives its users a platform where they can express their thoughts without feeling shy or being judged, the company draws a clear line between freedom of expression and potential danger. Special attention is paid to issues like extremism and self-harm — any discussions of such topics are closely moderated to ensure users’ safety.

Since we spend a lot of time on social media, our online environments are just as important as our environments in real life. That’s why, instead of blaming social media for all the problems of our times, we should put more effort into creating online communities that will help teenagers live healthier and happier lives.

The post Social media (un)safety: how ASKfm helps teenagers on the edge appeared first on .

England’s Covid unlocking a threat to the world, experts say

IoT security risks are real – this is how you mitigate them

What Steps Should the Average Citizen Take to Maintain Cybersafety in 2021?

One in three ‘unlikely to take Covid vaccine’