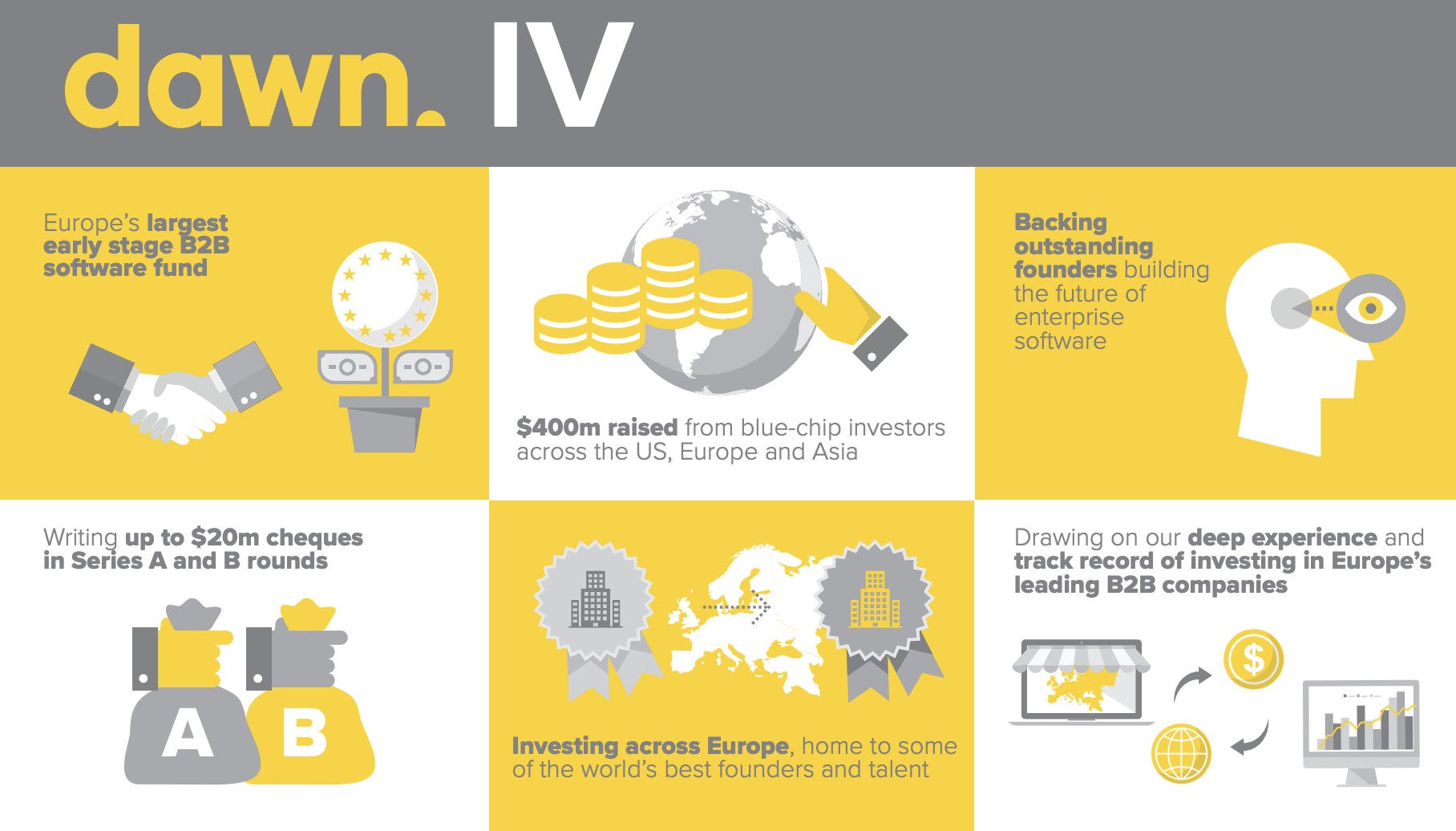 Dawn Capital, one of Europe’s largest venture capital fund dedicated to B2B software, has today announced the close of Dawn IV at the hard cap of €333 million / $400 million.

The fund was oversubscribed and closed within six months of launch, after receiving strong support from existing investors and attracting new investors from the US, Europe and Asia.

Dawn IV will pursue the same strategy as its predecessor funds, investing in Series A and B rounds in Europe’s leading B2B software startups and continuing to fund the best-performing companies through growth rounds with follow-on funds to successful exits.

The fund will focus on four core thematic areas in which Dawn has deep experience and a strong track record of maximising value creation: Data & Analytics, Security, Fintech and Future of Work.

Having invested in nearly 40 companies across 14 European countries that span these four themes, Dawn will provide capital and counsel to support leading founders to scale their business’s growth through exceptional talent, products and business models to become category-defining, global titans. Dawn IV will target initial investments of $5m to $20m.

Dawn has a recognised track record of investing in the European leaders that dominate deep local markets, before going on to become multi-billion dollar global champions. From Mimecast and iZettle, respectively listed on NASDAQ with a $3.1bn market cap and acquired by PayPal for $2.2bn, to current unicorns Collibra and Dataiku, the team has consistently sought out and helped grow businesses that now power hundreds of thousands of workplaces around the world.

Dawn Co-Founder and General Partner, Norman Fiore commented, “Innovation thrives on instability. System-wide shocks drive change that startups can exploit ruthlessly, while incumbents are incapable of adjusting. Historically, these shocks were either financial, technological or societal.  In 2020, we’ve had all three at once: technology shock as the cloud came into its own, financial shock which will force society to do more with less, and a fundamental change to the way our working society is organised.

“We can’t wait to see where our entrepreneurs take us as we invest Dawn IV and greatly appreciate the support of all our investors in making this a successful fundraise.”

Haakon Overli, Dawn Co-Founder and General Partner, added, “Dawn has always been a long-term believer in the strength and vast opportunity of European B2B software. The fantastic support our investors have shown for Dawn IV reinforces our belief that now really is Europe’s time to build the next generation of category-defining software that will underpin the future of enterprise, work and commerce globally.”

Podcast: SaaS data protection vulnerability and how to manage it

Protests call for end to NHS underfunding and...