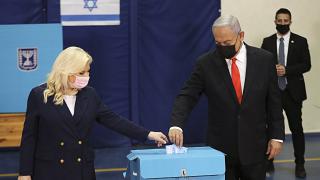 Exit polls from Israel’s fourth election within two years suggested Benjamin Netanyahu’s ruling Likud party was ahead but still short of a clear parliamentary majority needed to form a government and end the political deadlock.

Unofficial figures from three major television channels released late on Tuesday evening showed the Likud party with around 31-33 seats in the 120-seat parliament, the Knesset. That was far more than the opposition head, Yair Lapid, predicted to take about 16-18 seats.

Did a million migrants really leave the UK during the pandemic?

Lawyer for Britney Spears’ father responds to fans over conservatorship

Kremlin critic Navalny appears in court as calls grow abroad for his...

Why Nauta Capital financed £2.5M in this SaaS...